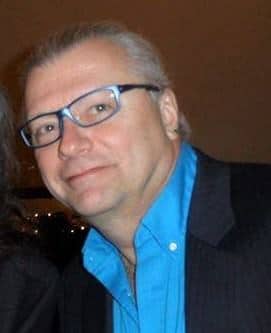 Ed grew up in Beverly, NJ and was the tenth out of eleven children. He said he chose to be a loner as a child and always loved to sing, singing before he could talk.

He went to the University of South Florida in Tampa studying music and sang with the St. Petersburg Opera Company for several years. Tapes of his music were chosen by Julliard and he sang with the Westminster Choir in Princeton, NJ. It was through friends at Westminster Choir that Ed met his partner Eric; they have been together now for 36 years.

They came to New Hope in 1983 because it gave him the “freedom to be me.” Having an LGBTA community along with the arts made it a special place for Ed to call home. Ed and Eric opened a business in New Hope, “Mystickal Tymes” which they still own today.

Ed (aka Berrie Lyndon) got into drag on a dare from his partner Eric one Halloween. Ed went to the Baron in drag and was asked by then director Jackie Cochran to do his own show. With Danee Russo as his drag mother, Ed started performing. When Jackie retired, he did his show, “For Your Eyes Only”. Berrie Lyndon appeared on the Phil Donohue show and went on to win Miss Gay New Jersey America in Asbury Park in 1989 and also the Miss Cartwheel Pageant in 1989.

Ed tells a story of how he came out of a birthday cake as Marilyn Monroe at the Prelude for Monica Ray’s birthday party. He’s impersonated Marilyn, Liza Minelli and Eva Peron in “Evita.”

He said after Danee passed away he stopped doing drag for a while. After losing so many friends and loved ones during the AIDS epidemic, he had to find his perspective again. His love of doing drag made him realize he could still bring happiness to those who were left.

His favorite places to go in New Hope are Karla’s, Zoubi where Ed bartends, Martine’s and the Lambertville House. He said that he still loves it here after all these years. “New Hope is an eclectic place with a lot of energy. I feel that I have gained my own empowerment through all that I have experienced over the years.”

He said, “Never listen to people saying what you can’t do. If you set your mind to it, you’ll nail it.” Adding, “Life is like a bridge, go over it.”