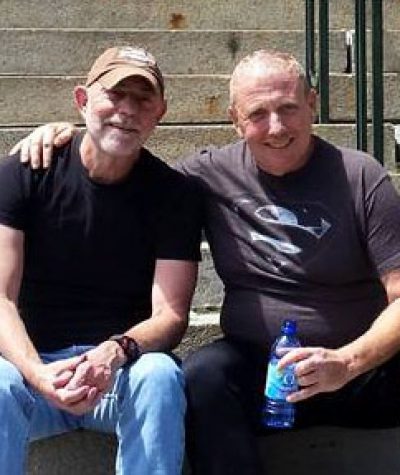 Neil and Rob met at the Cartwheel piano bar during the blizzard of 1978 and were snowed in.  It was Neil’s grandmother who gave him a list of the gay bars in New Hope back in the 1970s. Domestic partners and now married, they have remained together and live in Lambertville, NJ.

Neil was born in Jersey City, NJ and lived in Flemington and Clark, NJ. Rob was from Minnesota, living in Wyoming and Princeton before moving to Lambertville in 1977.

They said it was the large gay presence and nightlife that attracted them to this area. The Cartwheel, Prelude and Raven offered a variety of places to go. They also liked the large number of gay owned businesses and homes owned by the LGBT community, making for a comfortable life in the New Hope area.

They said during the 1970’s the huge number of baby boomers coming out made them feel secure and able to meet in public places without harassment. Neil and Rob joined the Delaware Valley Gay Neighbors started by Dan Kollar and Gary Nigh in Lambertville in 1981. They attended the first meeting and met many lifelong friends through that group.

When thinking of their favorite memories they recalled Mother Joe Cavalucci losing his teeth at Joys bookstore in Lambertville and Santa Saturdays at the Cartwheel. They have fond memories of all those who are now gone and feel blessed to have survived the AIDS Crisis.

Living here for such a long time makes Neil and Rob local historians. As members of the area’s LGBT community they said, “A successful 38-year relationship was indeed started at a gay bar in New Hope. Our parents were most influential in supporting education, both of us attaining a degree and having a subsequent successful career. We are now ready for a comfortable retirement. We are married so our rights as married couples are preserved.”

Through the years Rob and Neil have been noted for throwing elaborate and fun theme parties in their incredible Lambertville estate, which sits on a mountain top overlooking the Delaware River.

Now retired, Neil had a career in pensioned insurance claims and Rob still works in IT.  When they can, they love traveling around the world. They love coming home to their fabulous view of the Delaware River and Bucks County.